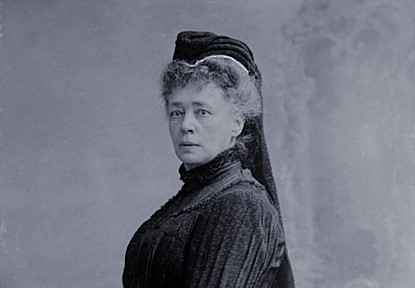 Born as the Countess Kinsky in Prague, she married Baron Arthur Gundaccar von Suttner and became a writer, exploring the idea of what a society could create if it could achieve peace. In the 1880s, they became aware of the International Arbitration and Peace Association and other European organizations who were making the case for arbitration and peace in place of armed force.

Von Suttner wrote both a non-fiction book, Das Maschinenzeitalter (The Machine Age) and a fictional novel of the impact of war on women, Die Waffen Nieder (Lay Down Your Arms). Both were published in 1889. Die Waffen Nieder was based on research and was translated into 12 languages.

Overnight, von Suttner became one of the international leaders of the peace movement. By the 1890s, she was corresponding with Albert Nobel on her work, and he told her he was considering adding a Peace Prize to the others he was planning to create in his will.

She pushed for an International Court of Justice, where conflict could be resolved through arbitration. She attended the first Hague peace conference in 1899, which agreed to setting up a Permanent Court of Arbitration. This was established in 1900, began operating in 1902 and is still in operation. It is co-located with the International Court of Justice in the Peace Palace in Hague.