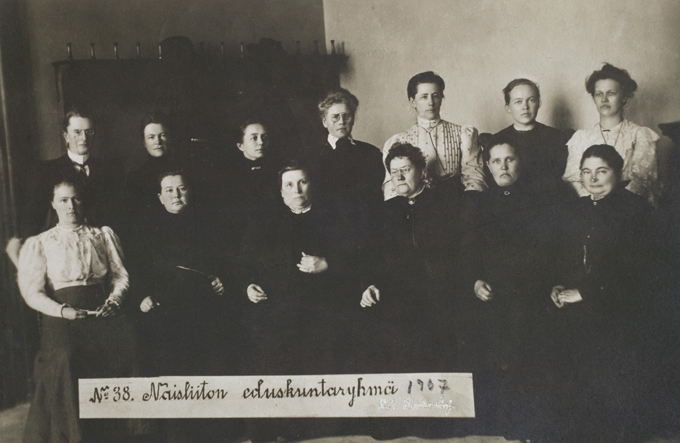 Often women have had to fight for female suffrage to be incorporated into an existing democratic system. Finland’s democratic system included universal suffrage from the start. Until 1905 the Grand Duchy of Finland was governed by the Diet of the Four Estates (nobles, clergy, burghers and peasants). It was also part of the Russian Empire.

In 1905, the Diet met to discuss petitions calling for suffrage and a Senate bill was put forward. The Nobility and Burghers refused to debate the bill due to the loss of power universal suffrage would have on them. The Clergy favoured expanding suffrage for men first before addressing votes for women. The Peasants group favoured universal suffrage but did not want to allow women to stand for Parliament.

In the autumn of 1905, workers’ associations called a general strike. At strike meetings, people passed resolutions that explicitly included women in the call for suffrage. As part of resolving the strike the Diet supported a call for a parliament and universal suffrage for everyone over 24. Women pushed to ensure gender parity was explicitly included.

“We [women] have to shout to the world that we are demanding the right to vote and to stand for election, and that we are not going to settle for anything less. Now is not the time for compromises, because if we are excluded now, we can be sure that it will remain that way for a long time.”

The Tsar agreed to the Diet’s recommendations. Finland held the first election in March 1907, with a turnout of 900,000. The nineteen women elected were:

One of the social Democrat MPs, Miina Sillanpää, was the leader of Finland’s Maid Association and went on to become Finland’s first female minister in 1926.

Some of the other social democrat female MPs were imprisoned after the Finish civil war in 1918 for having been on the socialist side. At least one of these, Anni Huotari, returned to parliament after her release from prison.