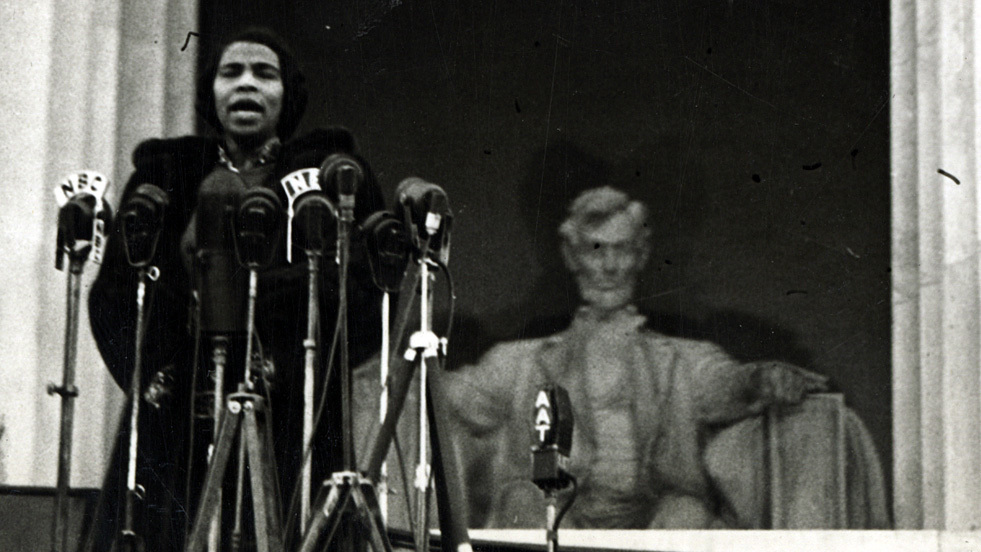 On 9 April 1939, Marion Anderson stood on the steps of the Lincoln Memorial in Washington DC and sang “My Country, ‘Tis of Thee”. A crowd of 75,000 listened to her, and millions more tuned in on the radio. She sang where she did because she had been refused the use Constitution Hall by its owners. Marion was black, and the owners had a white-artists-only clause.

By 1939, Marion was one of the most famous concert singers in the world, and she had been invited to sing in Washington by Howard University. They needed a venue large enough for the crowds. Constitution Hall seemed a great choice, but it was owned by the Daughters of the American Revolution (DAR) and was – like most venues -segregated. After a black artist had refused to perform to a segregated audience, the DAR introduced the white artists clause rather than desegregate. Eleanor Roosevelt – then first lady of the USA – resigned her membership of DAR when she heard about the decision to refuse Marion the hall. The National Association for the Advancement of Colored People suggested Lincoln Memorial and the huge crowds arrived to hear Marion sing for free.

Marion Anderson had been born in Philadelphia in 1897, the granddaughter of a freed slave. By the time she was six she was singing in the junior church choir and as a teenager she was making up to $5 for singing (around $133 in today’s prices). She was turned away from the Philadelphia Music Academy because she was black.

In the 1920s, she moved to New York and in 1928 she sang for the first time at Carnegie Hall. In the 1930s she moved to Europe and began touring. Composer Jean Sibelius was so enraptured by her voice that he both altered and composed songs for her to perform. Her opera recordings became best-sellers.

In 1943, the DAR invited Marion to sing at Constitution Hall in front of an integrated audience.